Hilltop Ruin: an Indian ruin in the Grand Canyon lights up

This magic moment at an Indian ruin in Arizona appeared. But only after I confronted my deep-seated fear of heights.

Hilltop Indian Ruin on the Escalante Trail deep in the Grand Canyon is showcased by the setting sun lighting up the rock walls during a magic moment. Stunning abstract landscape art that will catch attention and stir the imagination in your home.

The changing moods of the Grand Canyon.

And how nature helped me in overcoming fear.

Inspired by a 10-day river rafting tour of the Colorado River through the Grand Canyon with Tour West and Adam Schallau.

Our afternoon hike uphill on Escalante Trail from our Cardenas camp by the Colorado River blazed in the sun in late April. I felt flushed, and tired. My nerves were on fire, not from the heat but from fear. I love the Grand Canyon and have such a passion for finding abstract landscapes within it, but my mind was consumed with terrors.

On the inside, every cell in my body rejected standing close to the edge of the cliff overlooking the Unkar Delta. In about an hour and a half, the red rock would glow at sunset. Everyone else would line up for photos. My fear of heights, or rather, the fear of falling into the dark depths, resides deep in the marrow of my bones. I would love to overcome this irrational feeling so I, too, could take part in this stunning overlook. Though I try reasoning, my reaction is primal and unshakable.

A bubble close-up of the photographers at the overlook at Unkar Delta near the Colorado River in the Grand Canyon. Seeing the people at the cliff edge in greater relief gives a sense of scale in this abstract landscape.

Why am I feeling so unsettled?

Practicing the reverse of prayer. I needed a magic moment to remind me of that.

While this fear of being close to the edge gripped me, I hadn’t anticipated this reaction as we set out on this hike. However, once those feelings rose, I knew it wouldn’t take long for anxious thoughts to consume my awareness if I didn’t take action.

There was a time in my life that I lived in an almost constant state of anxiety. I worked long and hard at self-discovery to understand why I felt that way. To boil it down, I practiced the reverse of prayer.

Where other people use prayer to stay in the moment and to connect to something that is larger than themselves–something timeless, I practiced fear because I felt alone. How incredibly limiting life is at that level.

To release habitual worrying, I learned to focus on the present moment. I also reminded myself to be an observer of what I was feeling.

So I went back to those basics on that afternoon. I reminded myself that fear of falling is human and is a function of keeping myself safe. I had not heard of anyone falling at that location. Our group was focused on practicing safety first. There were people around to help me if I needed a hand.

I also reminded myself I could choose what felt best for me and I didn’t have to shoot this particular site. I took some deep breaths, and I decided I wanted to explore the Indian ruin our guide had mentioned was in the area instead.

Walking into the past: Indian ruins in the Grand Canyon.

That is how we chose to walk the path to Hilltop Ruin, and Indian ruin in Arizona’s Grand Canyon. I felt guilty that Bill wouldn’t get the sunset shot at the cliff edge. And relief. I urged him that if he wanted, he could stay. We’d be within eyeshot of each other. He chose to walk with me to the ruin. We were both curious.

The ruin is a one-room structure of dry-laid masonry: large rocks gathered by Puebloan people perhaps around 900 A.D. when they farmed the river delta below.

The view around the structure is stunning. The temple walls of the Grand Canyon dwarf the hilltop structure, namely Vishnu and Apollo Temples. The summits of many of the landmarks in Grand Canyon National Park are named after mythological deities. I bent down to see through the frame of the south window, and Apollo was centered perfectly. I wondered what these people called those summits?

Around the west side of the structure, there are three windows. Since archaeologists have eliminated an entrance that would invite exploration, erosion, or destruction, I can only speculate. Windows take a lot to construct. Perhaps they showed the seasons as the sun sets by the time of year across the horizon?

Romantically, I envisioned this as a spiritual place, a kiva or shrine. Indeed, there seems no reason to live on a hilltop and port food and water uphill unnecessarily. 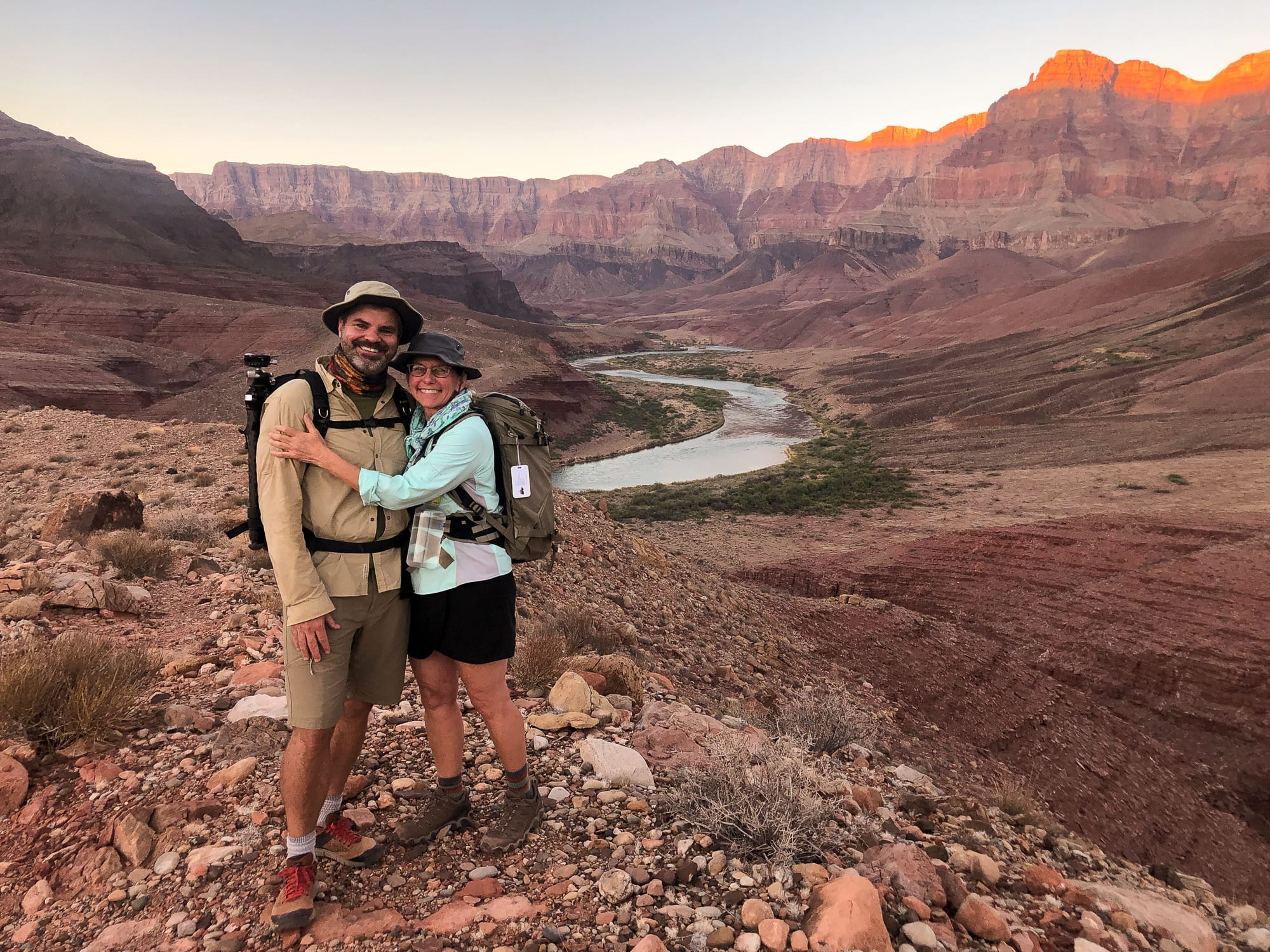 Here’s Bill and I in the abstract landscape of the Grand Canyon close to the Indian ruin. Behind us is the Colorado River that we rafted for 226 miles in ten days.

To learn how I started with photography and writing, click here.

For more about our Grand Canyon photo guide, Adam Schallau, click on the photo.

What inspires you? For me, it is about connecting and sharing.

My nephew is an archaeologist, and his passion for what he does is inspiring. Seeing this Indian ruin and hoping he might try to visit all the wealth of archaeological wonders the canyon holds, I wanted to document this structure to share with him. Walking a distance away to achieve the vantage that included some vastness of the canyon setting, I thought about how little I knew about photographing the canyon.

Massiveness affects how light moves around the walls in all directions. Deep shadows go almost black, yet the sky above is in bright contrast, a juxtaposition in getting the exposure correct. I confessed to Bill that it might take several visits to get into the rhythm of the canyon’s interior before I’d be able to photograph anything really significant. I told myself, “just enjoy the experience.”

This setting is intimidating, inspiring, and humbling. This was my first trip below the rim with a camera in hand.  I had completed a rim-to-rim hike a few years before, which was rushed. I had one task that day and it was to make it from the north to the south rim. So I could hear waterfalls, I could glance down side canyons, but I had to keep my course so I wasn’t hiking in the cold and dark that night.

“Ancestral Light,” the first photo I worked when we got home from our 10-day rafting trip. This abstract landscape with a touch of the day’s last light reveals a magic moment at this Indian ruin in Arizona.

When magic happens in photography.

A spontaneous moment. A magic moment.

Looking at the sun coming close to dropping below Vishnu Temple to the west, I decided to take a shot before the structure faded into shadow. I snapped a few photos, checked my settings, zoomed in on focus.

Then I looked up.

The most moving scene transcended. The light seemed to be lightly touching the hill’s edge, running its finger right down to the ruin and highlighting the walls in a golden bath of light. Shadows swallowed almost everything else in the landscape. What a magical moment in photography.

What a beautiful connection to all that was and all that is. At that moment, it seemed the ancients had heard my doubts, then conspired to show me a fleeting miracle. In mere seconds, the light faded.

“Reflect then, that your ancestors set up those trophies, not that you may gaze at them in wonder, but that you may also imitate the virtues of the men who set them up.”  –Demosthenes, Greek Orator

And if you love the Grand Canyon and can’t get enough, type in “Grand Canyon” on the Search page.

Join Me for Inspiration

Would you believe I could save you 15% on your car insurance?

I didn't think so. But while you're here, I'd love for you to subscribe to my newsletter.
Your imagination wants to go places, so let's explore!